Deadpool travels home to Earth, but Macho Gomez is waiting for him, and he’s brought some of Deadpool’s old “friends” – including Hydra Bob, Big Bertha, Taskmaster and Blind Al. They all have one thing in common: Wade screwed them, and they want his hide! Then, Wade gets what he’s always wanted: a chance to die! With his ridonkulous healing factor, Wade can’t be killed by any ordinary Joe – so he finds the biggest, strongest, greenest and angriest guy in the Marvel Universe: the Incredible Hulk! It’s a last-man-standing battle between the Green Goliath and the Merc with a Mouth – a battle Wade’s trying to lose. The question is, can he? Plus: In a bonus tale of Deadpool past, Wade must procure a vial of the Hulk’s gamma-irradiated blood! 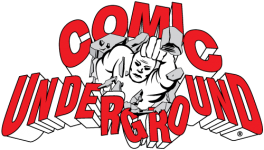 Please feel free to look around ! We are still under construction, but many of the products you see here will be available. Soon you will be able to buy and find all of your favorite comic book, card and gaming collectibles all in one place!